I strolled out of the station in Auner in my Republic Fleet Firetail with little hope of immediate death and destruction.  The only possible target in the system was in the same station - probably wasting his time playing video games or some such nonsense.  Loser.

A few asteroid belts had nothing of interest and no one showed up in the meantime, so I jumped to the next system to see if there was more activity.

In Resbroko I often find pilots.  It's a popular system for the faction warfare folks and there were a dozen in local.  I headed for a safe spot and checked the dscan.  Yes.  A victim!  There was a Tormentor in one of the faction warfare complexes.  Just what I was looking for.

I headed that way and jumped through the gate, turning all the knobs up to 11.  The Tormentor was just a few km away when I landed so I immediately hit all the big red buttons and set to orbiting the poor soul.  My guns and rockets were quickly taking massive chunks out of his shields.  “This shouldn’t take long,” I thought to myself…

Things went very well, I was quickly through his shields and then halfway through his armor.  He tried to repair his armor, but I was sure it would be a losing battle.  I turned off the heat on my guns and rocket launcher so that they wouldn’t burn out.  I wouldn’t need the extra heat damage.  “This shouldn’t take long,” I thought to myself…

Then I heard the message that I had run out of rockets.  I forgot to reload them after killing the hound stealth bomber the night before.  No problem.  I’ll just use my autocannons.  “This shouldn’t take long,” I thought to myself…

I noticed that he seemed to be keeping up with my damage more than at the start of the fight.  While I was having little problem repairing my armor – he also seemed to be doing OK.  He was having massive swings – I’d have his armor almost down to nothing then he’d pull almost all of it back.  But the trend was clear when he started to dip into his structure.  He was fighting a losing battle.    “This shouldn’t take long,” I thought to myself…

I turned up the heat on my guns to give them the extra oomph to smash through the last of his structure.  He vainly tried to repair the damage to his armor and managed to get half of his armor back.  I, in the meantime, was losing a bit more armor than I was repairing and also seemed to be getting close to my structure.  But I would prevail now that I had overheated guns and he was often in structure.    “This shouldn’t take long,” I thought to myself…

The bashing continued – his ship was dipping seriously into structure and then recovering big chunks of armor.  My armor was being whittled away and I was into structure too.  But it was just a matter of hitting him at the right time when his armor was gone and his structure low.  One good shot and he’d be history!    “This shouldn’t take long,” I thought to myself…

My structure was being depleted – almost half of it was gone.  But he also was having some serious struggles.  His structure stood at just a sliver – maybe 10% left.  But he was pulling back big chunks of armor every few seconds.  Suddenly it didn’t look like as much of a sure thing as I had thought.    “I hope this doesn’t take much longer,” I thought to myself…

I continued to batter at the Tormentor and hoped for the best.  I was clawing back armor whenever I had the chance – but it was starting to look like a toss-up on who would survive.  Then it happened.  BOOM!  The Tormentor blew up!  I survived.

GFs were exchanged in local and I picked up the meager loot thinking to myself, “I’m glad that didn’t take any longer…”  I checked the killmail and discovered that it was a dual rep Tormentor (which even with one armor repairer is a tough nut to crack) -  that explained how he was able to repair so much damage.  Definitely a GF.

Posted by Jack Dancer at 5:50 PM No comments:

I managed to pull myself away from my Wormhole PI alt and my Red Frog freighter alt and my station trader alt long enough to have Jack Dancer fly out of the Auner station to see what was happening.  Lots and lots of drones were the first impression.

I went back to the station and grabbed a covert ops ship and tossed out some combat probes to hunt them down and picked up a dozen hobgoblin IIs.  Just cleaning up the neighborhood.

Then I went back and grabbed a fighting ship.  My newest plan is to not assemble any new ships - but to use up all of the ones I have already assembled in the station.  There's more than 20 of them - all sorts from rifters to battle ventures to wolfs (wolves?) to breachers to jaguars to firetails to ruptures.  Some of them I've never even flown - but they're put together and ready to go.

So, I hopped into one of the half dozen firetails sitting there and left the station looking for trouble.

The firetail is set up basically the same as my usual slasher fit - the extra mid slot has a tracking disrupter with an optimal range disruption script.  The plan is to orbit something at around 5k or 6k and shoot them from outside their range.  It's worked with the slasher and I was hoping that it would work with the firetail.

I did a quick dscan and there was a hound.  That's something I don't often see - a stealth bomber.  I narrowed down the scan and found him at an asteroid belt.  Probably ratting.  I turned everything up to 11 and warped to zero on the belt.  Sure enough he was there - but 30k away from where I warped in.  I've flown stealth bombers and know that they can put out a lot of damage.  My first thought was that I didn't relish the idea of flying 30k while being hit by his missiles - so I turned around and left the vicinity pronto.

At my safe I had some time to think about the situation.  Not so much the dynamics of the firetail vs. hound fight - but more my weltanschauung as an Eve player.  I've gotten a bit too care beary with all of the PI, hauling, and trading.  Time to blow up some of those piles of isk that the other activities have accumulated for me.  So I warped to a planet and again headed to the asteroid belt that held the hound - ready to have a fiery finish to the evening.

I landed about 30k away again, but this time I headed towards him with my afterburner overheating.  25k.  20k and still no explosion so I targeted him.  15k.  10k and I was still alive to tackle him and turn on the web.  Guns and rockets activated, I was doing damage.  Also the target disruptor with the range script (which, as everyone knows, is totally useless against missiles...).

I set my orbit for 5k and continued to rain destruction on the bomber.  He went through shields and then armor (stealth bombers aren't known for their defensive prowess).  Then into structure and BOOM!  He blew up!

To be honest, I'm not sure if he ever shot at me.  It could be that he was afk the whole time.  My situational awareness isn't always the best in these fights as any reader of this blog realizes...  (a post mortem review of the combat logs shows that he didn't shoot in my direction at all).

I tried to grab his pod, but made the noob mistake of not hitting the approach button - so whatever direction I was heading when the hound blew up was the direction I just kept on going - inside and then quickly outside of warp scramble range on the pod.  He apparently woke up then because he flew off to safety.

While not an epic fight - it was nice to get a kill worth about 50 million with 10 million isk worth of loot in the wreck (that took me 4 trips to haul back to the station).

That is not the authentic Jack Dancer! 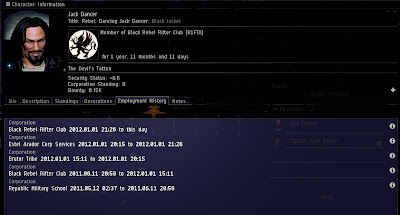 Posted by Jack Dancer at 6:28 PM No comments: