Don't You Hate When That Happens...

Yesterday I punched the update button on my handy Eve Trader app and saw that I had a bunch of transactions and a total profit from them of 2.6 billion isk.  YOW!  2.6 BILLION?  That’s unexpected – I had checked a few days earlier and so expected to see a number much smaller.

On closer examination, I saw that I had made a profit of 917.3% on a couple Zainou ‘Gypsy’ Signature Analysis SA-705 implants.  I bought them for 117,964,835 isk and sold them for 1,200,008,010 isk!  Obviously someone had mistakenly added a zero when placing a buy order (intending to offer 120 million, but with an extra zero offering 1.2 billion) – to which my two implants (being at the top of the list apparently) were immediately sold.  These two implants resulted in a profit of 2.1 billion isk!

I’ve done similar things in the past.  It’s a horrible feeling (even if it is just pixels in a computer game).  Stomach wrenching, adrenalin pumping, bile grabbing at the throat horrible…

But now, what to do in this situation.  Eve is a rough place with lots of unsavory people.  But, that’s not me.  I’m generally a nice guy.  So, in order to Do the Right Thing™ and also to help teach the seller to be more careful with his fingers I decided to return to him 75% of the mistake.  I wrote a message to the seller pointing out the mistake (it possible that he hadn’t noticed it) and sent him about 1.6 billion isk.

My work was done and I slept very well last night…
Posted by Jack Dancer at 11:32 AM 1 comment:

I recently had a vacation in exotic Iowa visiting family and partaking of the fine cuisine (like the deep fried pork tenderloin sandwich in this photo…).  Very enjoyable all around. 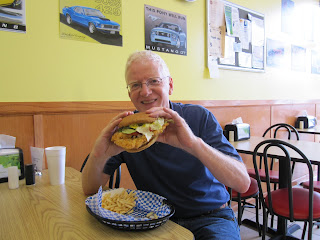 When I returned to Eve after being being away I discovered that one of my two subscriptions had lapsed (I usually pay for my subs with a couple PLEX each month purchased with isk that my station trader and PI alts earn).  I also discovered that my default method of payment apparently was a year-long subscription (probably a leftover from when I first signed up for Eve).  CCP had dutifully charged my credit card the $131.40 for a year’s subscription with an email saying, “Subscription Renewal Success”.

My first reaction was one of distress.  How could I not notice that my sub was about to expire?  Maybe I could ask that the payment be reversed and use one of the PLEX that I have sitting in a station somewhere to reactivate the account?  Would they do that?

But then, after considering it a bit, I decided to let CCP have the money.

My first Jack Dancer post was way back in 2011 (May 11th to be exact).  That meant that I’d been playing two (and for a while three) accounts for the past 4 years and previously had only sent a one year subscription ($131.40).  So this recent subscription made the total about $263 that I had paid for four years of fun.  About 18 cents a day…  A bargain.

And, now that one account is paid up until next summer, I’m a bit less tied to grinding for isk.  My station trader might not update the orders in the morning or the evening and I don’t worry about it anymore.  My two PI alts are moving to a 3-day schedule (instead of the previous daily updates).  I can do what I like to do and not worry about isk making as much.  And I’ll probably still be earning about the same amount of isk – so I’ll have an extra 900 million (that previously bought the second PLEX) each month for replacing ships and other projects.