I often hear from people that my flying an interceptor for exploration is a bit, ummm, odd.  The usual conversation often ends with something like, “Well, I guess if it works for you then great.”  I can sense them rolling their eyes and sidling away from this crazy person...

Let me present my thoughts on the interceptor as an exploration vessel. (the idea isn't unique to me - check out this video from JonnyPew)

Most explorers use either a special exploration frigate (Cheetah, Helios, et. al.) or one of the Sisters of Eve ships (Astero or Stratios).  These ships have specific bonuses for scanning that decrease the time it takes to scan down sites.  They also are able to equip a covert ops cloaking device so that they can warp around under the safety of a cloak.  And they have bonuses for hacking relic and data sites.

These features are all very valuable for exploration - but not vital for my style of exploration where I cruise around null sec space searching for relic sites.

The relic sites in null sec generally have more valuable loot than the relic sites in high or low sec.  And they generally have more valuable loot than data sites.  And the loot is much, much, much more compact than data site loot -  I never worry about overflowing my cargo bays with too many intact armor plates.  Wormhole space (C1-C3) has identical sites – but can be very scary (both a good and bad thing).  I generally prefer the prosperity, relative safety and situational awareness advantages of null sec.

Null sec space has some peculiar features unlike other space – population density and warp bubbles being the most important ones for this discussion.

With low population density, it is easy to find systems that are empty - sometimes several in a row.  I avoid running relic sites in systems that have other capsuleers.  If I find a relic site, I’ll wait for any locals to move along or will move along myself.  Speed of scanning is not important when you are the only person in a system.  When I used to do DED 4/10 sites in high sec, scanning speed was of paramount importance – if I didn’t scan it down quickly, someone was likely to come along and steal the site from me.  In null sec that “someone” doesn’t exist.  So having the scanning bonuses isn’t as important.

With an interceptor I am immune to the effects of warp bubbles.  Bubbles are not especially common in null sec – but they do exist.  I’ve come across bubbles on gates and between gates - usually with some Bad Person lurking there like a spider in a web.  With a fast aligning interceptor travel is gate-to-gate.  No need to bounce off of nearby planets to see if a gate is clear of bubbles.  No worries, just simple gate-to-gate travel.  Nice!  No need for a covert ops cloak if nothing can catch me without one.

Jack Dancer flies a Stiletto interceptor – being a former Rifter pilot the Minmatar interceptor seems most comfortable to him.  Stilettos have 3 high slots, 4 medium slots and 3 lows – a very utilitarian layout for exploration purposes.

In the high slots I have a regular cloak (not a covert ops cloak) and a Sisters Core Probe Launcher fitted with Sister Core Probes (plus 8 extras in the cargo hold to reload while I'm scanning).  The cloak is to hide myself when scanning in a system or when Bad People are looking for me.  The Sister version of the probe launcher and Sister probes are to get maximum strength on my probing efforts – the interceptor isn’t bonused, so I need all the help I can get.  The third high slot is empty, but I supposed you could stick an off-line salvager there in case you came across something interesting to salvage.

The medium slots are no-brainers.  A microwarpdrive, a Relic Analyzer II, a Data Analyzer II, and a cargo scanner.  The microwarpdrive is very handy when in a site to quickly get from can to can (sometimes 70km apart).  The Relic and Data Analyzers are (of course) for hacking the cans.  Having the T2 versions is vital if you want to successfully complete the null sec sites (they are tougher than high and low sec sites).  And the cargo scanner is for (rarely) checking out cans in data sites to see if any of them contain the valuable pirate POS tower BPCs.   Feel free to off-line the data analyzer and/or cargo scanner if you have fitting challenges - you can online them (and off-line something else) when you need them.

The low slots have 3 inertia stabilizers.  Inertia stabilizers lower the align time to under the magical 2 second mark (be sure to train Spaceship Command to V).  Under 2 seconds is where even insta-locking enemies will not be able to catch my Stiletto on gates.  Or so I hope.  There are rumors that lag and other weirdnesses might come into play and make the interceptor catchable.  But I prefer to not think about that… *shudder*

The rig slots include two of the Emission Scope Sharpener I rigs that enhance relic virus coherence.  Since my focus is on relic sites, I need all the help I can get with them (especially since the Stiletto has no relic site bonuses).  With this setup I have 130 virus coherence (I think that's the total) and 30 virus strength.  Enough to not be frustrated by null sec sites (but not enough to guarantee success each and every time).

That's all there is to the ship.  With it you can sneak around null sec.  Find relic sites in empty systems.  Profit!

I was thinking of writing an exploration guide and even had a couple parts written out - then I came across Wingspantt's excellent guide.  Job done.

The only advice I would give potential explorers to maximize your profit is:

Catch Me If You Can

My daily routine is to check the map on eve-scout.com to see where the wormholes might lead.  I'm especially looking for links to the areas at the bottom center of the map around the Stain region - that's Sansha space where the most lucrative relic sites are hidden. 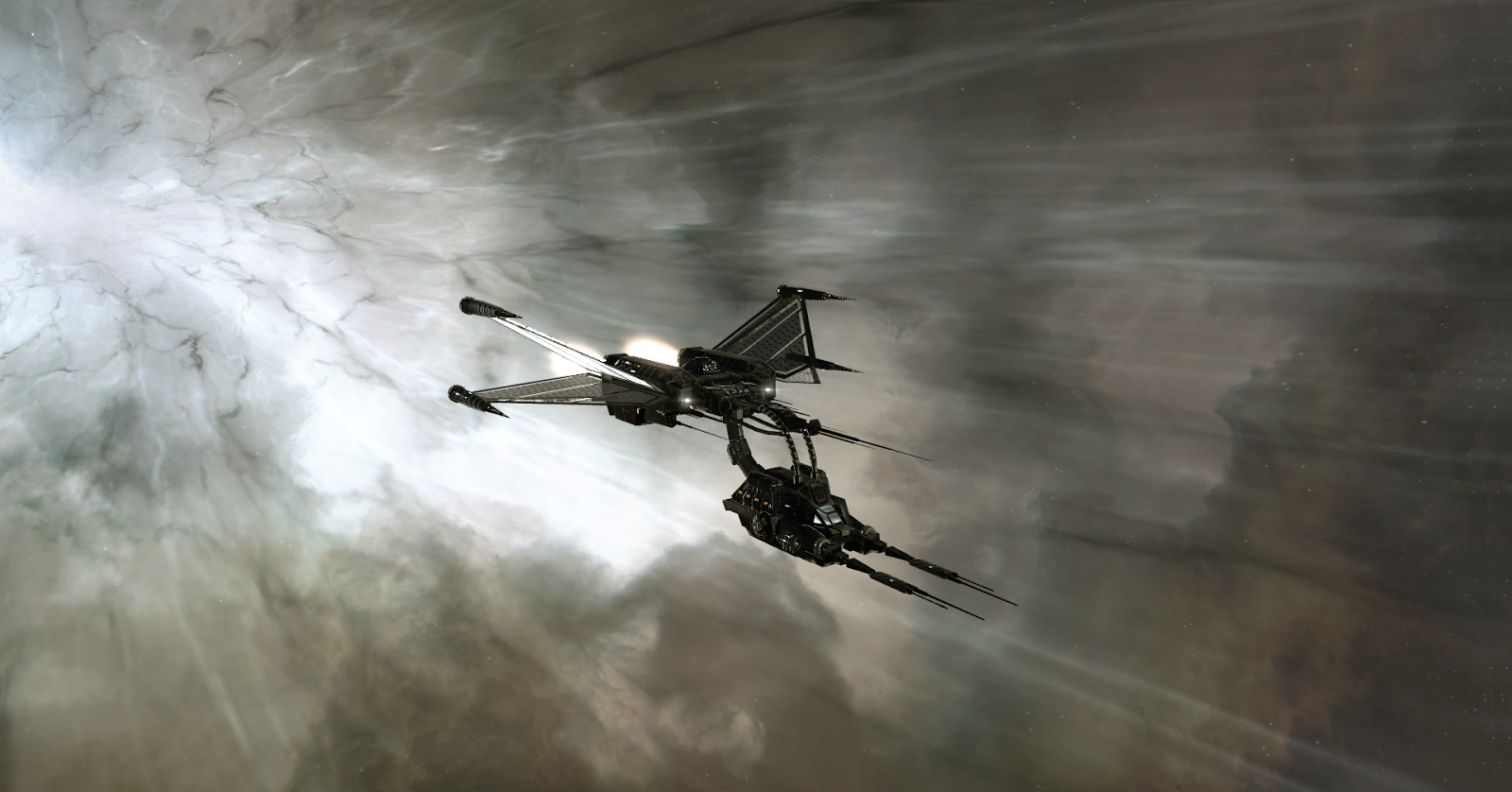 So last night when I saw there was a link to Catch - I jumped at the opportunity.  And jumped into my Stiletto interceptor!  The wormhole opened at GE-94X and I immediately found a Sansha relic site in that system.  that seemed like a very good omen.  I scanned it down and started opening the cans.  And, as I was racing through them, an Astero showed up in the system and threw out probes.  Another explorer.  But in a ship that could be dangerous to my little interceptor...

I finished 4 cans (for a measly 400k isk in loot) and left the final two when the Astero's probes had all clustered around the site I was in.  I expected the Astero to arrive at any time.  So I left the last two cans and in local wished the other explorer better luck than I had with the first four.

I headed off to the next system.  I had charted a course to the far end of Catch - the systems near K717-8 had very few jumps in the past hour so I was hoping to find some solitude.  I soon received a convo request from the explorer that I had seen in GE-94X:

Pococurante > Just curious: why did you leave the remains rather than the rubble?

I gave an honest answer, "I just grabbed the close ones.  Is there a difference?"  It turned out there is (Pococurante educated me on this - Thanks!).  The proper order is Ruins - Remains - Rubble to go from the ones most likely to have a large payout to the ones least likely.  That way when something scares me out of the site, I'll know I did my best to maximize the profits.  Pococurante and I chatted a bit about exploration and wished each other well.

I continued on and found Catch to be a very lively place.  Ships and wrecks were everywhere.  One system had 400+ capsuleers.  Many of the gates were littered with a dozen wrecks or more.  I came across a bubble or two.  Plus I found lots of ships of all sizes when I jumped through gates - that definitely gets the blood moving! I continued my tour congratulating myself on the purchase of a Stiletto interceptor in Thera (at a very stiff markup compared to Jita prices - but now worth every penny).  Interceptors are immune to the effects of warp bubbles.  And they align very fast when equipped like mine - so they are almost uncatchable when traveling gate to gate in null sec.  Hope I didn't just jinx myself by saying that.

On the other hand, interceptors are not ideal for doing relic sites as they don't have bonuses for virus coherence or strength.  But it wasn't too bac - of the 6 or 8 sites I found in the tour of Catch I only failed once and blew up the can (a "ruins" can of course...).  Otherwise the interceptor worked fine.

Some of the relic sites were very lucrative (one can alone contained 65m in loot).  I only did the sites that were in empty systems - so I had to leave one or two untouched when the other occupant didn't move along.  In the end I returned to Thera with about 190m worth of loot in my cargo hold and an evening of excitement to remember.

Posted by Jack Dancer at 1:54 PM No comments: