After a very happy time in the Signal Cartel Corporation, a fantastic group of explorers that are great fun, Jack Dancer decided to try something different.  Faction Warfare (aka FW).

I listen to several podcasts and have heard Ashterothi and Kirith Kodachi talk about their FW corporation, Aideron Robotics  on their podcasts Hydrostatic and Inner Sanctum of the Ninveah respectively.  Besides having a nifty name, I thought that Aideron Robotics sounded like something I'd be interested in.  I gathered that it was a mature, smallish, close-knit bunch that enjoyed small fleet activities and the general excitement of FW.

So I joined and everything, so far, has been as advertised.

We have a website (linked above), Discord(tm) for breaking information, and Teamspeak 3(tm) for communications during online activities.  I've been having fun learning about the mechanics of FW - how these sites (both defensive and offensive) work and what there is to do.  As a pirate I always was mystified about why my prey (or more often what turned out to be my doom) were lingering in them...

Last night Kirith Kodachi led his weekly Sunday evening fleet of about 15 (plus and minus one or two on several occasions) on a two hour roam of the neighborhood around our home is Fliet.  Our fleet of destroyers (with some logistic support) picked up a few kills and lost a few of the logis along the way.  I managed to get on only two of the kills (I'm not fast enough with sending out my drones to help with damage from long range...).  The first was a claymore worth about half a billion isk and the second was a gila worth about 300 million isk.  Wow.  After years of fighting rifters, these were eye-openers...

The corporation has at least 3 regularly scheduled fleets in the evenings and I hope to fly with them whenever I can.
Posted by Jack Dancer at 9:15 AM No comments:

Well, that was interesting.

After cruising around Syndicate in null sec and zigging every time I should have zagged when finding other solo pilots (these coming and goings on the gates can be confusing) I finally managed to stumble across a Sabre sitting alone on a gate.  But (of course) I was set to automatically jump through the gate to the other side and when I did I discovered a pair of his mates in a Svipul and Deimos.  I managed to elude them by warping toward a station (but ended up stuck in a warp bubble part way there...).  I decided to turn around (about the time the Svipul and Deimos also arrived in the bubble) and motored my way to the edge before heading back to the gate with the Sabre on the other side.

I jumped through and landed right next to the Sabre.  Excellent!

I set an orbit, turned everything up to 11 (overheat) and hit my damage control.  Things were going reasonably well.  Until the Svipul and Deimos arrived to help the Sabre.  Along with an Astero eventually (to join in on the killmail for my empty pod...).

So Godzilla II accomplished exactly what I wanted it to do - a bit of excitement and fun.
Posted by Jack Dancer at 6:11 PM No comments: 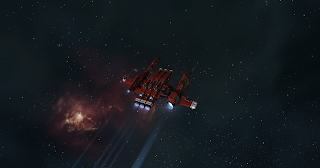 It was my understanding (and experience) that having an align time of under 2 seconds makes me safe when I'm flying my interceptors.  Apparently not, or maybe I'm confused about how quick my ship really is (that might be more likely...).

I was moving a Stiletto back from high sec via a wormhole towards my base in Stain when I came on a Svipul sitting on a gate.  No problem.  I've been yellow boxed lots of times and never caught yet.  So I picked the next gate and hit warp.  Red Flashing Lights!  Sirens!  Explosions!

I chatted with Glorhs Semah afterwards and asked if I had done anything wrong.  Apparently not - he's just quick to lock.  Looking at his killboard, I see that I'm in good company (even another Signal Cartel corpmate right before me...).

Fortunately, it had been a good morning for relic sites, so the loss was covered several times over by the loot I had sold in Amarr an hour earlier.

Mr. Semah is now on my watchlist and I'll be more careful when I see he's around.

NOTE: As I've said before, WingspanTT's guide is excellent!  But I wrote this up and it might be a bit simpler if you are looking for a short overview for hacking relic and data sites.


Here's some advice to make the mini-game work a bit better for you.  Some of it might be very basic, so feel free to roll your eyes and move on to the next...

Most of this advice is applicable to relic/data sites in null sec or in wormholes (where the null sec sites now spawn).  If you are doing high sec or low sec sites – they are much easier and you can take more of a whac-a-mole approach and not worry about tactics.

Here are the things you'll run up against (along with their proper names): http://wiki.eveuniversity.org/File:Hacking_Indications.png

I really don’t have a clue about the names when I’m playing - they’re just easily identifiable symbols to me.   But for the sake of clarity in these instructions I’ll use their actual authentic officially assigned names instead of “that wrench thing” and “the eagle beak thing” and “the wedge thing” and whatever other image comes to my mind when I’m in the mini-game.

Usually the System Core that you seek is located on the far side of the maze from where you start – head there as quickly as you can.  First off, go through the maze and don't mess with any of the defensive subsystems until you need to (except Restoration Nodes and Virus Supressors – see below).  Leave the Data Caches (the white dots) alone until all of the regular explorable nodes (the empty circles) are revealed.  And even then be careful of the Data Caches - they often contain bad things.  Go back to them if you're desperate to find a tool and you're facing defeat.

As you go through the explorable nodes and reveal them – you will also be revealing a number for a short time on the revealed node.  That number is how far a Good Thing is from you.  It could be the System Core, or a tool, or a Data Cache (which in this case is classified as a “good thing” but probably isn’t).  With these numbers you can often eliminate a corner of the maze from the possibility of it having the System Core – if the numbers are 4s or 5s and there are only 3 nodes on the longest path towards the corner, then there’s nothing good in that neighborhood.  Head to the other corner of the diagram.

If you run into a Restoration Node - deal with it immediately.  Usually without using any of your tools (tools can are better used on other stuff - this might not be good advice, but it's the way I do things) - it's two or three clicks to get rid of the Restoration Node.  But if you don't - it'll make all the other bad things even more badder every time you take an action...

When you get a Utility Subsystem - use it immediately.  There is no reason to not click on it and get those points and free up a spot for useful tools.

Eventually you’ll have no more routes to try without running into a Firewall or an Antivirus.  Attack an obstacle with low strength and in the direction of where you think the System Core might be and continue on.

You have two main tools to help against the obstacles.  The Kernel Rot cuts the strength of any Defensive Subsystem in half.  The Polymorphic Shield protects you for a couple rounds from getting any damage.  Try to figure out which would be most appropriate against whatever you are up against.  I don’t really make much distinction between them and use them randomly (I do pay more attention when my coherence is almost gone - then I tend to use the Polymorphic Shield for protection).

And remember that if you're getting close to the end of your coherence (your “hit points”) and finally stumble on the System Core - you can use these Utility Subsystems to help against it and maybe save enough to survive and get the loot.

Posted by Jack Dancer at 9:39 AM No comments:

Listen to the nine minute  Episode Zero of the Learning Cliff podcast and then not listen to Episode One.  I don’t think it’s possible.

Highly recommended!
Posted by Jack Dancer at 8:49 AM No comments:

WingspannTT has a neat hint about improving the immersion factor of Eve Online.  Check it out here:  https://youtu.be/OttpSwaATl4
Posted by Jack Dancer at 12:44 PM 1 comment: